A change of leadership at HIRSCHMANN Engineering USA, Inc. After more than 26 years, Peter Knowles heads into retirement and his successor is Max Golter.

After 9710 days Peter D. Knowles - President and COO of HIRSCHMANN Engineering USA, Inc. entered into retirement. Peter started his career at HIRSCHMANN in March 1992 and managed the US subsidiary since the date of incorporation.
The skilled mold-maker developed an interest in technology at a very early age. At six years old, he already repaired the family’s lawnmower. After his high-school graduation, Peter Knowles was employed at several well-known EDM and CNC machine manufacturers, initially as a mold-maker and eventually transitioning into sales. A key employer was SK Enterprises which represented HIRSCHMANN products in the US during the early 1990’s. This started the interaction with the headquarters in Fluorn-Winzeln, Germany. Eventually the decision was made to establish a US subsidiary to serve the markets in the US and Canada. HIRSCHMANN looked for a suitable candidate to grow and manage the company and chose Peter D. Knowles. With Peter’s retirement, the era of Peter Knowles leading the US subsidiary has now come to an end after more than 26 years.
In the spring of 2018, HIRSCHMANN began the process of searching for a new successor. The new successor, ready to take over the management in the US is Max Golter. He is not only the new CEO of the company, but also a colleague who spent many years of his working life in Germany and understands the needs and wishes of the German parent company. During his first visit to Fluorn-Winzeln in June 2018, he established his network within HIRSCHMANN GmbH.
The official handover took place at the IMTS show, in September 2018, in Chicago. For Peter, it was the 23rd and last IMTS show. The Managing Directors of HIRSCHMANN GmbH, Rainer Harter and Andreas Jesek, presented Peter with a plaque as a symbol for his efforts and loyalty to the company. They took this opportunity to proclaim him a “Lifetime Member of the HIRSCHMANN Family”. September 28, 2018 was his last day of employment at HIRSCHMANN.
The management and the entire staff at HIRSCHMANN wish Peter all the best, and a relaxing and enjoyable retirement. 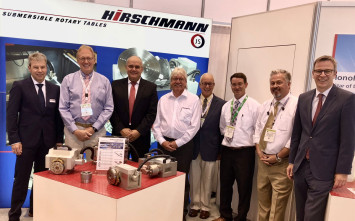 Pictures: HIRSCHMANN GmbH
Free of charge. Please send us a copy after publication.